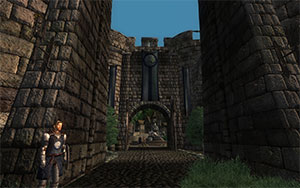 Why don’t you do it yourself, you lazy ass git? The boars are just there a little further away – like ten, twenty meters – and some of you are standing on top of the wall.

If you so much as SPIT in their direction, you will hit them in the eye. But you are asking me to go ten meters away and hack at the boars while you are watching us from over the wall.

This is one of the first quests i remember from Oblivion. The quest details are not exact, it may be wolves or bears instead of wolves, however that’s how it went.

I got a little further from the walls and city gate and looked back. I can see both the boars/wolves/whatever and the city gate, wall and the guard altogether in one picture. However i tried, i couldn’t suspend my disbelief to make myself believe that this was a believable event that could happen in a fictional world consistent in itself.

One major reason for it was that Oblivion was the first 3D RPG i played.

The guard is in human size and shape, walls are in proper size as well, the world is neatly constructed and textured and believable,

Your brain looks at the city walls, the guards, the trees and perceives them to be in real sizes and correctly represented. Then you look at the distance you are going and it just doesn’t feel right.

Even if you forcibly suspend your disbelief or ignore it, your perception is working in the subconscious and watering down your gameplay. 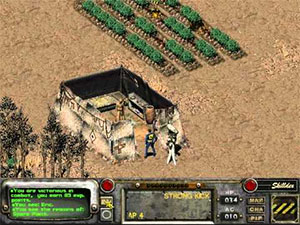 “There be rabid plants in my farm!” (But this time they are more believable)

Now behold the quest in which the Healer in Arroyo asks the Chosen to clean up his farm from carnivorous plants in Fallout 2.

The farm plot is just there, around ten meters away, but this time its more believable.

Because the image you are looking at is representative.

The depiction/rendering of the world in Fallout 2 game design is more cartoonish/handcrafted and therefore from right away you accept that things are being more represented, than accurately depicted.

This makes it much more easier to suspend belief. You are being told a story, in a representative fashion. More like a children’s book than a movie. Which makes it easier to believe while not lessening the feeling and atmosphere relayed within itself at all.

In the earlier days of gaming things were almost always like that. Because of limitations of technology (computer hardware, basically) the games were designed in more representative/storytelling fashion than accurate depictions. Even in games where early 3D rendering was used, representative shapes and textures were intentionally used, or the realistic textures they tried to use looked so pixelated/dumbed down that the rendering looked representative by itself without intending to.

This changed with advancing hardware power. We were able to use higher resolution textures, more polygons, better mapping, shading and effects. Stuff got much more real.

Naturally came the first games which attempted to depict 3d worlds in landscape. Like Oblivion and its immediate predecessors.

That’s where it hits the fan

Look at the below diagram Freak2121 from Reddit made comparing game world sizes of different games :

Click on the pic see it in full size

The catch is Daggerfall world is procedurally (dynamically) generated by code, whereas the others are handcrafted fixed landscapes.

The problem with creating a fully finalized game world of ~100,000+ km2 landscape is that it would require hard drives’ full of pre-generated landscape content to even create and store the game. Leave aside memory, cpu requirements to actually implement in the game.

Procedural generation frees you from a lot of constraints, but also it makes it so that no two terrain will be exactly the same – so much for a depicted, certain game ‘world’.

As you can see, there is also hardware constraints and increasing realism making themselves felt according to the age of the games – despite Skyrim has much better technology, its much harder to generate a bigger game world because of much higher resources the higher texture resolutions and detailed landscapes require.

Skyrim feels much larger and scaled compared to Oblivion thanks to stronger hardware making it possible to create a larger-scaled game world. The scale doesn’t feel as off as Oblivion. So things are not just 10-30 m away from the quest giver, but rather a few hundred meters away.

Though, world’s setting also can make things better or worse : Its much easier to deal with disbelief in a Skyrim when you are told to go and clean a bandit camp just 100-200 m away from a watchtower in Skyrim than you are told to go clean a Mutant camp just 100-200 m away in Fallout 3 – man, all those mutants have those miniguns, rocket launchers and stuff which can just raze the shanty town here in seconds if they fire from 100-200m away, but they are just sitting there living without even thinking of firing a shot in this direction for all those years. Same goes for the settlement giving the quest – you have freaking guns – use them.

Higher technology is much less believable in incorrectly scaled worlds.

Then what’s the solution?

That smashing question has a VERY good answer – and the solution was here all along:

What does mumbo jumbo mean now, let’s illustrate with an example: 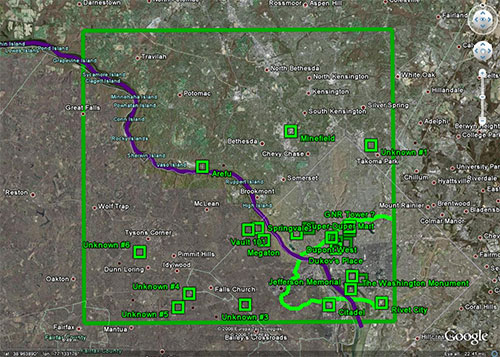 Now, when you traveled from place to place in Fallout 2, you clicked on points in map, and started the travel : Faster if you had the car, slower if you were on foot. But what you would be seeing would be that the icon representing you moving across the map.

When you arrived at a defined location, you would click to go into the ‘town world’ – ie location – and you would manifest in the actual location.

Random encounters also happened with premade locations, and if you stopped randomly, you would end up inside a procedurally generated random location.

Now this doesn’t look like it will allow for traveling and exploration in a game world, like how Skyrim allows.

What’s missing from this formula is the on-foot or on-vehicle actual traveling if you choose to do it, in place of fast traveling. Like walking or riding a horse in 1st or 3rd person in Skyrim.

This can be accomplished by making terrain generate procedurally as you go into new regions, allowing you to travel in an uninterrupted world. If you come close to a fixed, pre-created location, then that pre-created zone can load up.

The procedurally generated terrain wont be the same twice in a given coordinate on the map of course – saving resources and hardware. But this creates a dent in consistency since you will never see a random zone you saw ever again – imagine a ranger forgetting every bit of land he travels on. Inconsistent.

This can be overcome by introducing marking/remembering. Whenever you ‘mark’ a zone in the game to remember, that zone becomes permanently saved in your game, and its there in the same way you visited it before in case you visit that location on the map again. This would increase the size of save games or game cache, of course, but much, much less than actually creating a 100,000+ km2 game world with all the terrain pre created, and those who have strong hardware and lots of disk space to spare can go crazy all they want with marking terrains to remember.

Realism is intact as well – there is no way any ranger would be remembering every nook and cranny even in obscure zones neighboring the usual trails he always travels – you remember regions you frequently travel and you remember the major landmarks/features you use to navigate or utilize to camp, do things etc.

So the roads, the regular tracks which would be in the game world would be pre generated along with cities, settlements, points of interest and important locations and their immediate environments, whereas all the rest – the wilderness – would be procedurally generated.

This solution saves immense resources when creating big game worlds, which could be used to bump up the scale of actual fixed locations. So no more putting 5 huts and one inn together and calling it a ‘city’ like in Skyrim.

Let’s apply this to Skyrim

Its a good recent example. Lets use Skyrim to illustrate this:

Whiterun becomes a pre-generated, fixed location which is always present in the game with its current form, except MUCH bigger in size now thanks to newly available resources. Its no longer a rather smallish village (~10 houses) with one inn and one high fort, being sold to us as a ‘major trading hub’ in Skyrim and a capital hold.

This solves the problem of scale within the city itself as well – you wont need to force yourself to believe that this place with ten houses, an inn, a fort and few other buildings is a ‘major city’. The size will also allow an immense amount of new adventures, quests, exploration to be done inside the city itself.

The road is pre generated as well – so if you walked from Riverwood to Whiterun and then back, what you would see would be the same zones.

But go towards the mountains off the road and exit the ‘road zone’ (a rather thinnish region around the roads) and you enter procedurally generated terrain.

Mark a zone, and it will be remembered and and turn into a fixed, pre-generated location in your map. Hell, mark all zones as you go, if you have the disk space to do it.

In addition, since no procedurally generated terrain will be exactly the same, you are looking at never ending exploration in the wilderness, which can be spiced up with many random encounters at any point as opposed to having to script encounters into certain locations in pre-made terrain.

We solved a lot of problems with this method :

Well, looking at list above, it seems that we didn’t only solve the problems, but also even enabled new possibilities.

Now imagine a game with these features…