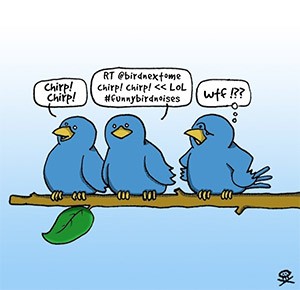 It’s 2016 and Twitter still is forcing its users to communicate with entire world with abruptly cut short sentences of 140 characters – not so much different than a 19th century telegram.

It’s not possible to transmit anything that is mildly complicated on any topic that may be deeper than your last coffee or breakfast. And when you do, you have to do it in consecutive tweets which are cut from abrupt spaces to converge into a hodgepodge of a ‘conversation’ which is quite hard to follow and digest by itself.

In contrast, Facebook – a place which you have a higher chance of encountering the most recent pictures of your distant uncle’s grand son – has become a hotbed of social activism thanks to its practically no-limits strategy.

You can share complicated, long political articles as well as intricate environmental memes without any impediment. And what you communicate is neatly packed into one single share which anyone can read, digest and reuse without any back-and-forth click mania – as opposed to Twitter ‘conversations’.

Which, turned Facebook into an actual factor in politics, as Bernie Sanders campaign undeniably demonstrated – US electorate is producing, transmitting, sharing and consuming political information through Facebook and organizing via Facebook, therefore circumventing the hold of traditional media in matters of politics. So successful they are that they scared living daylights out of the traditional political media establishment, forcing them to do overtime in ‘shaping public perception’ to push their favored candidate(s).

You can’t do that on Twitter still. But if snarky smart one liners for complicated issues are your thing, then Twitter is the best place.

But thankfully, this may be changing. According to various reports on tech press, Twitter is already preparing a feature which will allow Tweets to be longer than 140 characters. Something in between 5,000 to 10,000. Quoting a recent piece on Article on Recode:

Twitter is currently considering a 10,000 character limit, according to these sources. That’s the same character limit the company uses for its Direct Messages product, so it isn’t a complete surprise.

There is no official launch date set in stone, these sources say. It’s also possible the character limit could fluctuate before it rolls out the final product, which people inside Twitter refer to as “Beyond 140.” Re/code first reported that Twitter was building a product like this back in September. A Twitter spokesperson declined to comment.

Long past time, I say.

140 character limit was the main thing which prevented me from using Twitter, since i don’t like to oblige myself to short snarky one liners, and I don’t like sharing or interacting with trivial stuff on social networks either – like many internet users.

A good decision. Now lets see it get rolled out.