In case you didn’t know HAF-X, it is a 8 year old computer case from Cooler Master. 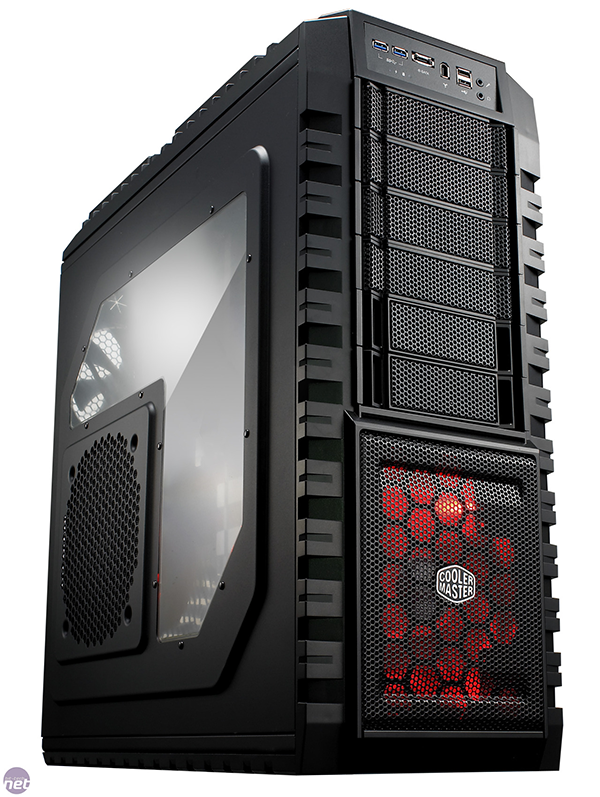 This case came out in 2010~, and it ruled the roost for years after that. When you look into the PC case scene today, the practice, the technology, the offerings, the prices, especially the performance, you end with a weird picture of affairs. This case, which should have been outdated 5-6 years ago, still rocks at the top of the list!

Check the below revisit of this computer case made by a well known reviewer.

He finds the ‘style’ outdated, since today’s case fashion seems to be pressed glass cases which are loaded with leds inside, and he dubs various functions like front panel on HAF-X, or its 20cm+ fans also as outdated. He talks about how it lacks stronger cable management systems of today, or the cowling for PSUs, and various other points.

At the end of his review, he also notes – the case still has excellent airflow, and its able to contend with the top offerings of today in regard to cooling performance.

Not only that – the case is able to compete and surpass majority of top offerings today for SLI or Crossfire setups that run more than 1 GPU! One thing he fails to note is that, the case is capable of supporting any motherboard that supports up to 3-way – yeah, you heard it right – 3-way SLI or Xfire.

And it keeps them cool under load

As noted in the review, this is not only due to the case’s fantastic airflow, but also its side panel fan that’s pushing air directly onto GPUs. Which is a rarity on today’s cases, because the pressed glass side panels that show the interior of the cases somehow have taken precedence over actual performance.

But this case has side panel fan which provides that kind of performance. And gigantic fans, a well designed interior that allows the airflow to be a top contender even today.

What’s more is that the things which he misses to mention turn the tables entirely.

The case is silent

Which is a rarity today, even with the newer generation fans.

Because of the nature of fan technology, there is no way a 12 cm fan that is common today, can push the same amount of air like a 20 cm fan, or, * gasp * the gigantic 23 cm front fan of HAF-X.

What’s better, is that it becomes hush-hush silent if you actually install a fan controller and turn down the fan RPM. These gigantic fans are able to push still gigantic amounts of air inside to keep any decent PC build cool enough.

The case is large

You can even put in a server motherboard if you want.

You can install the largest water cooling systems.

You can fit in the biggest graphics cards. At least 2 of them!

The biggest PSU can get in. And still leaves space.

Being that large means you can’t possibly need to change it due to space for, say, the next 10 years to come. Come consumer-grade motherboards with dual processors with 64 cores, you will possibly be able to fit them in. Gigantic graphics cards? Can fit in.

In the space department HAF-X definitely stays unparalleled in 2018.

Important stuff it doesn’t have are not so important

How many times are you looking into your computer case on an average day?

Isn’t it distracting to have an entire case full of leds flickering on the side or nearby from a full glass panel while you are gaming?

God forbid, especially when the lights are turned off or dim?

It’s not that HAF-X doesn’t show its insides, by the way, it has a half panel on the side, and default red led for its front fan too. Even that may be too much and distracting to many.

The visuals, the led show inside the current case fashion, stuff that which occasionally looked at by their owners, cannot surpass importance of performance, cooling or silence.

When did industrial/tank look went out of fashion. It seems that there are a lot of people who did not get the memo. As evidenced by the new case offerings which still has the industrial look…

So when you get down to it, the downsides listed in the review, indeed pale in importance in contrast to the importance they were given even in the objective review above…

Lets top it up with a live example

I have a HAF-X case.

I crank up everything to max in almost every game.

As an example, my Skyrim is modded with ~100 mods, ENB, massive texture mods, lighting mods, NPCs, major Skyre overhaul, everything that you could possibly imagine that would kick a computer in the balls.

But that’s not where the magic is

The magic is in, while doing that:

– All the fans on the case are default CoolerMaster fans that came with the case.

– I have only one fan at the top fan slots! I even closed the other fan slot with a transparent plastic sheet, so there is no airflow at all in the missing fan slot!

– All the fans on the case are set to run in minimum via the Zalman fan controller i installed. Large ones 260 rpm, the 14cm 600 rpm!

– My cable management is a mess. Actually, i didn’t manage cables at all. They are just dangling inside.

– The early type PSU cowling which the case had, is not there. I just don’t use it.

– The case sits near a wall, with its rear ~ 30cm from the wall itself.

– The large side fan takes its air from under a table, with a 1200 watt PSU under it.

– The same table also shoulders the radiator of the central heating.

– The room is not even ventilated in the winter.

– As you can understand, my airflow and heat management is sh*t

And yet, i am able to run a X-fire rig under full load with demanding games without a hitch. And with no concern for heat.

But more importantly, i’m doing it as silent as possible – which is the most important – I don’t even crank up the fan controls at all from the minimum when i am running the X-fire setup, and what happens is that the fans which were not even whispering in idle do not change their RPM and noise, and gets far-surpassed by noise which comes from the gigantic 16cm tall tower CPU cooler with a 12 cm fan, and the noise of the Sapphire 7970 overclock edition coolers.

Even with that, the noise is nothing to look at. I can overclock more, kick the load up even more, and then maybe turn up the fans.

The takeaway and moral of the story

That’s very good for HAF-X and CoolerMaster, and it is very bad for the contemporary scene.

Performance should be held over form and style. There is little logic to having ~6 x 12cm fans screaming in your ear, breaking your immersion for the sake of a glass panel that shows leds which you rarely look at, a slim and ‘stylish case that only fits 12 cm fans, and peripheral features which do not mitigate these cons.

Silent large fans must come back.

Side panel fans must come back.

There should be top level offerings which compete and build on the successes of 8 years ago, like HAF-X – not stuff that get out-competed by it in 2018.

CoolerMaster had had made a case that is still hard to beat, even possibly unbeaten today if you factor everything in, and it must revisit and improve and re-manufacture HAF-X for the years to come

Update: Amazingly, HAF-X still seems to be available in various retailers in Europe – Amazon.es, Amazon.de, Amazon.it, Amazon.fr all have it, and the offering is sold by CoolerMaster themselves!